The first thing you will notice about Sri Lanka, perhaps before you’ve even hit the runway, is how green the country is. Thick swathes of verdant jungle stretch out in every direction, every inch of it buzzing with life. If you consider yourself a wildlife enthusiast or have ever even entertained a passing interest in nature then you’re in the right place.

With national parks all over the country, travellers are spoiled for choice when it comes to wildlife spotting. But when your holiday time is limited to just a couple of weeks, how do you decide which parks to go to?

If you haven’t already booked a tour package with us you will want to hire a jeep to take you around. Your driver will know the best places to find animals and will have a wealth of knowledge to share with you.

Every national park has its own unique features and appeal so it’s up to you to decide what you want to see and do. To help you make this tough decision, we have compiled a list of our favourite national parks and what you can find there.

As Sri Lanka’s largest and most popular national park, Yala has everything you could hope for and more. Sitting in the southeast of the island, Yala is home to a whole host of animals, including elephants, wild boars and sloth bears and is widely considered the best place in the world to spot the elusive leopard. Even if you don’t manage to spot a leopard, you might catch a glimpse of one of Sri Lanka’s numerous endemic species, such as the Sri Lanka wood pigeon or the Sri Lanka flying snake.

The only downside of Yala National Park is that because it is the most popular park on the island (over 2,500 reviews on TripAdvisor; 4/5 only), it is always full of tourists. If you want a peaceful experience where your jeep is the only one in sight, better head elsewhere. That being said, there is a reason Yala is so popular.

The best time to go to Yala if you want to spot elephant, leopards, wild boars and more is between May and June. Bear in mind though that this is also when Yala is at its busiest – particularly in the mornings. If you want to avoid the crowds as much as possible, avoid going on weekends and public holidays and try and time your safari for later in the afternoon.

Minneriya National Park – The One With The Elephants If you’ve decided to visit Sri Lanka’s Cultural Triangle (and I thoroughly recommend you do) then visiting Minneriya National Park is as easy as pie.

If you go during August or September you might even bear witness to “The Gathering”, the largest congregation of Asian elephants in the world

The principal attraction in this magnificent park is the hundreds of elephants that call it home. Herds of these majestic creatures flock to the edges of the park’s man made reservoir – known as the Minneriya Tank – creating quite a wildlife spectacle. If you go during August or September you might even bear witness to “The Gathering”, the largest congregation of Asian elephants in the world.

Minneriya doesn’t have quite the reputation as some of the larger parks, which means it is much quieter. While the selection of animals is not quite as vast as Yala’s, it’s worth the sacrifice for the peace and quiet.

Kaudulla National Park – The Other One With The Elephants (but fewer tourists!) 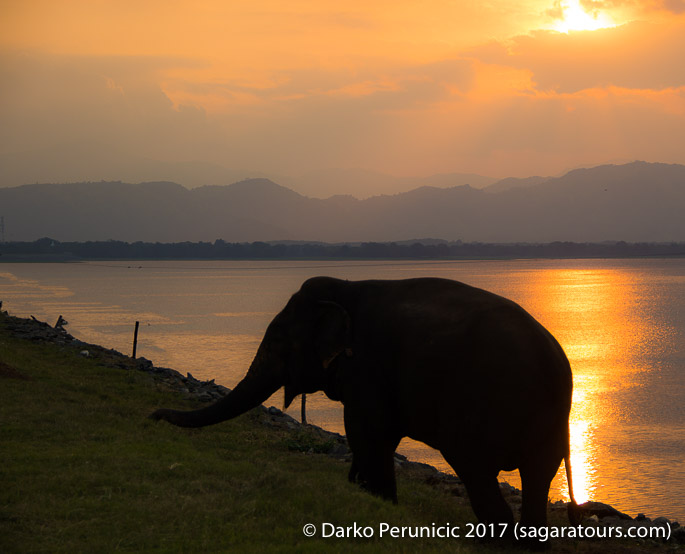 Not too far from Minneriya, Kaudulla shares its elephant population with the aforementioned park.

Both Minneriya and Kaudulla are situated along what is dubbed an “elephant corridor”. This means that the elephants migrate back and forth between the parks. If you’re unsure of where they might be, ask a local guide and they will point you to the right park.

The advantage of going to Kaudulla instead of Minneriya is that there are usually far fewer tourists in Kaudulla. This means you might not see a single other jeep during the whole safari – all the better for spotting the park’s incredible wildlife. Of all the parks in this list, Kaudulla was my favourite.

Bundala National Park – The Best One For Bird Watching Exquisitely varied in terms of landscape, encompassing jungle, salt flats and wetlands, the Bundala National Park is best known for its birds. Throughout the year, huge numbers of birds migrate to and through the park, giving bird watchers a visual treat unlike any other. Bundala is one of the most picturesque parks in Sri Lanka. There is nothing quite like seeing pink flamingos reflected in its rippling water. You might even see a crocodile here if you’re lucky. If you want to escape the coast for a bit and bask in a cooler temperature than Horton Plains National Park is an ideal destination. In Norton Plains, humid jungles are replaced by cool, grassy slopes and the wildlife has specially adapted to the slightly harsher climate.

Bird-watching is the main attraction of Horton Plains but there are also a number of animals on terra firma that visitors can observe such as the sambar deer, dwarf lizard and bear monkey. Those looking for the perfect photo opportunity should get to the park at dawn (around 6am) to make the most of the panoramic vistas at World’s End – a drop off that plunges down a staggering 880m.

Tell us what you think about Sri Lankan National Parks

I’d love to hear your experience in the comment area below!
Have any questions about wildlife spotting in Sri Lanka, don’t hesitate to ask me!

After catching an incurable case of wanderlust at the age of 20, JJ has spent the last 4 years travelling the world and writing about her adventures. Sri Lanka will always hold a special place in her heart because of its unbelievably good (if not sometimes ambiguous) food, friendly locals and stunning beaches.

Leave a comment or ask a question Cancel Reply

5 of our favourite National Parks

29 Things You Need to Know about Travelling to Sri Lanka